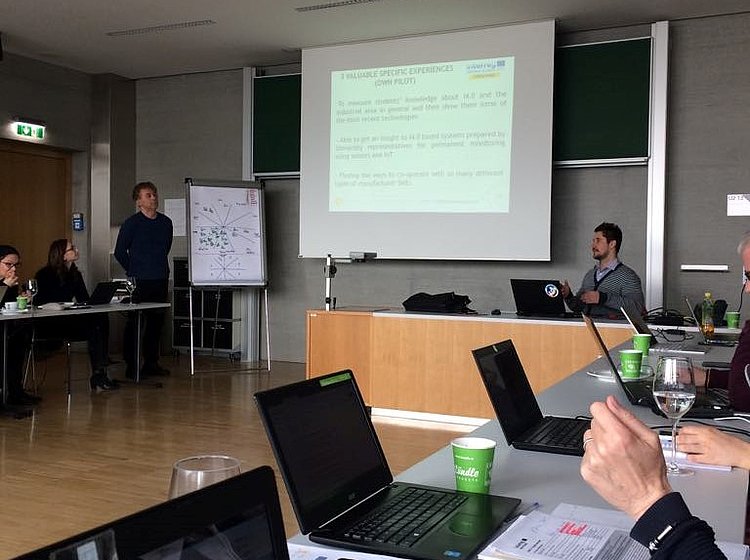 The URBAN INNO final project meeting was held on 12-13 March 2019 in Dornbirn, Austria (Vorarlberg), hosted by FH Vorarlberg. The representatives from all 12 partner regions met for the last time before the final conference takes place, to discuss ongoing activities and summarize project results already achieved. In sum, a lot of work lies behind the consortium, and yet a lot has to be done until the end of project.

The central part of URBAN INNO, the 9 local pilots are now finalized and were presented by their managers in an experience exchange workshop. The highlights of each pilot, as well as other valuable experiences, were collected into a splash canvas by work package leader Marco Combetto (Trentino Digitale). The results of the workshop are clustered experiences gained from the implementation of the pilots. These will be used for lessons learned – the practical insights may support future projects inspired by URBAN INNO.

Adding to that, 6 urban innovation action plans (UIAPs) are currently in their development stage. Each region has presented their progress, including thematic priorities, implementation issues and expected impact. The UIAPs are managed and elaborated by core team members and newly established innovation networks in the target regions.

Lastly, the translations of the Toolbox of smart participatory methods and tools are still in progress, expected to be finalized and implemented in the next several weeks. The translations into the national languages of the countries involved will enable the broader usage of the Tool itself, making it more accessible for potential users in Central Europe.

Project manager Tina Ragužin (City of Rijeka) announced the date and the venue for the URBAN INNO final conference, which will take place as a part of the international conference MIPRO, in Opatija (Croatia), on 23-24 May 2019. It will be a great opportunity to present the project results and outcomes to a very large audience, particularly interested and engaged into the URBAN INNO topics.

The aim of the EU project URBAN INNO, is to make Central Europe more innovative and competitive by improving the innovation potential of small and medium-sized urban ecosystems. Participatory methods and tools are essential components of the project, which include citizens in particular in urban innovation processes (www.interreg-central.eu/urban-inno).