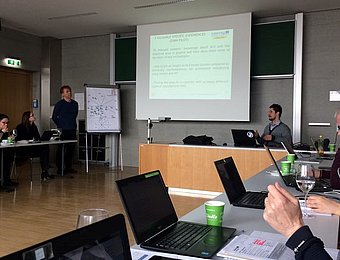 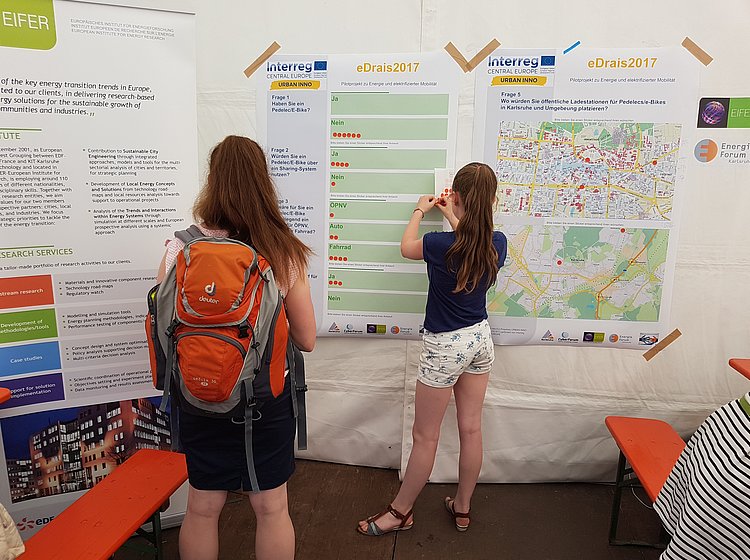 The Karlsruhe pilot project eDrais2017 organized a “future workshop” on the topic of "eBikes & Energy" on 16 September 2017 in Karlsruhe’s city hall. Within the framework of this special participation format, a vision on the subject of "Sustainable Bicycle City of Karlsruhe 2025+" was developed in cooperation with interested citizens, representatives of associations, the city administration and the municipal council.

Based on needs in the area of mobility in general and the use of eBikes/pedelecs in particular, a desired ideal state for the use of electrically powered or assisted two-wheelers in the near future was developed and the way from the current to the target state was discussed.

At the same time, the citizens of Karlsruhe were invited to take part in the pilot project by means of an online survey. On an interactive online map, suggestions for sharing and loading stations as well as new cycle paths could be drawn and commented.

Evaluation of the two methods

Both the” future workshop” and the online survey, both applied by the European Institute for Energy Research (EIFER), were assessed positively. Working in small groups enables citizens to participate more easily. Different perspectives and focal points can be devised more in-depth and later discussed and compared within the plenum. The tight schedule of the event was indeed challenging, but due to previous knowledge, high interest and the openness of the participants, the time issue could be compensated.

Also the assessment of the online survey was in general positive as an easy to use tool for citizen participation. Overall, the results are in accordance with the expectations of the participants and support their willingness to participate in further offers.

The Pilot Project eDrais2017 is a joint project of the CyberForum e. V., the European Institute for Energy Research (EIFER) as scientific partner, the Economic Development Department of the City of Karlsruhe and the EnergieForum Karlsruhe. It runs from May 1st, 2017 to May 31st, 2019 as part of the EU project URBAN INNO (CE677), which is co-funded by the Interreg CENTRAL EUROPE programme.

The aim of the EU project URBAN INNO, is to make Central Europe more innovative and competitive by improving the innovation potential of small and medium-sized urban ecosystems. Participatory methods and tools are essential components of the project, which include citizens in particular in urban innovation processes (www.interreg-central.eu/urban-inno). Regional pilot projects testing these methods are an integral part of URBAN INNO. Finally, a "toolbox" with smart, novel participation methods and tools will be developed. The results will be made available free of charge at the end of the project (May 2019) in English and in the languages of the participating countries.